The Northwest and Panhandle region of Florida is unique in that it is heavily influenced by the surrounding southern states. For many it is home to the closest Florida beaches. The Panhandle is an easy drive for people living in Georgia, Alabama, Louisiana, Tennessee, and Arkansas. It is also the shortest flight for those in the Midwest. Both geographically and culturally, it is more closely associated with the “South” than all other parts of the state. The panhandle is also known as being the most conservative part of the state. But it is still Florida, and as such has some of the best beaches worldwide and an almost zero chance of snow.

Known as the Emerald Coast, this part of Florida is most famous for its award winning beaches and fantastic beach towns. Cities like Destin, Panama City Beach, and Pensacola conjure up images of powder white sand dunes and emerald green waters. These Gulf of Mexico waters are some of the clearest in Florida and are popular for snorkeling and scuba diving. As with other west coast regions, the beaches generally have little wave action and gently sloping shallow water entries. This region is a popular tourist destination and the more well known beaches can get crowded around spring break or summer holidays. However, with even moderately sized cities spread out far apart from one another there is always a small beach town within a car ride to escape to during those busy times.

The climate in this region is on average the coldest in the state and pine trees are a more common sight than palm trees. Those interested in a slow pace of life, southern charm, defined seasons, and arguably Florida’s best beaches will be well served to consider this part of the state as their next home. 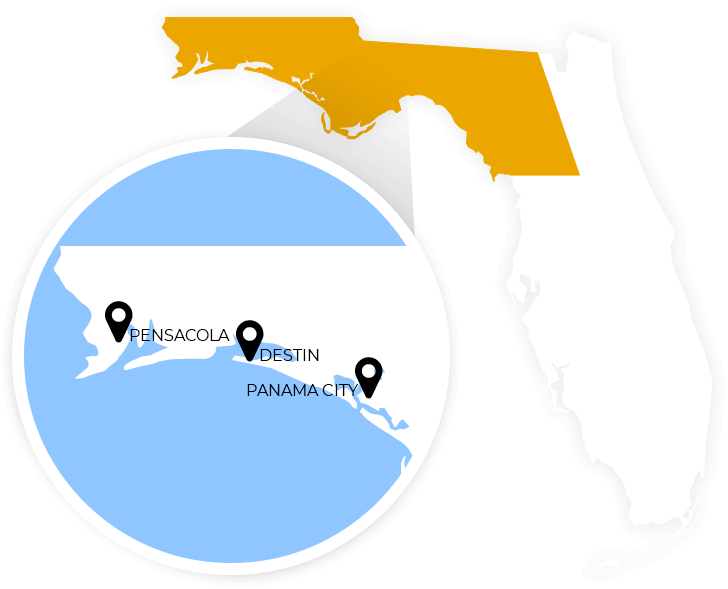