Central West Florida is perhaps the most well known and heaviest populated region on Florida’s western side. Tampa is what usually comes to mind when thinking about this area of the state, but the Central West has a lot more to offer than the economic powerhouse Tampa has become. This region continues to grow rapidly as it offers the best job markets on the west coast of Florida which attracts a lot of young professionals in addition to the retirees and snow birds looking to spend their time in warmer climates. Like the rest of the west coast you will find a heavy Midwest population settled here. There also tends to be a large contingent of Canadians that seem to prefer what this area has to offer.

The Central West Region has some of the very best beaches one will find. Multiple beaches up and down this coastline are consistently ranked among the worlds very best. Known for powder white sand and generally clear blue water, these beaches feature less wave action than those on the east coast along with shallow, gradual entry. Due to their popularity, beaches here can get crowded from both residents and tourists during certain times of the year. Like the rest of the west coast there are numerous bays, coves, beaches, and islands for boaters to explore. The climate in this part of the state is similar to the Central East Region with winters being noticeably warmer than the Panhandle but colder than the Southwest Region. You can get an occasional winter freeze in this area and because of that, it is the northernmost boundary for many tropical palms and plants.

There is less of a resort vibe along this stretch of coast than Southwest or Northwest Florida. You feel a greater sense that you are in the action, especially around the larger Tampa Bay metro area. One will find more things to do here, more restaurant’s, nightlife, culture, professional sports, and events.

Compared to Northwest Florida and the Panhandle: 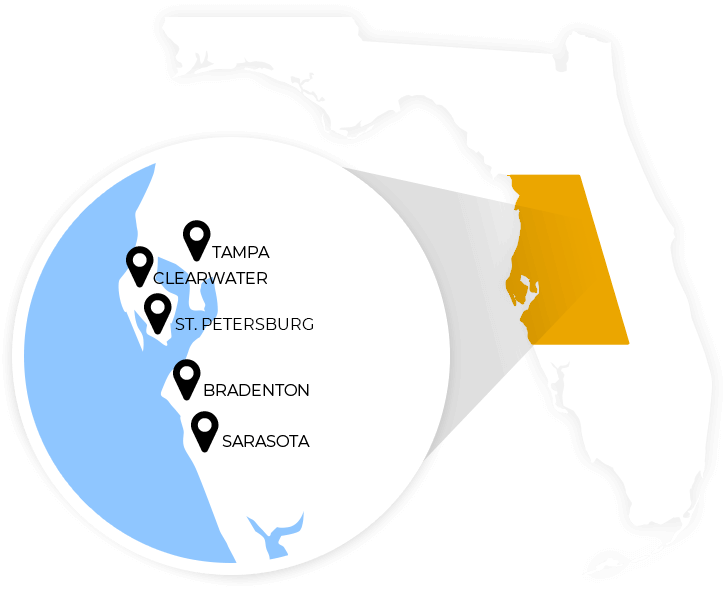